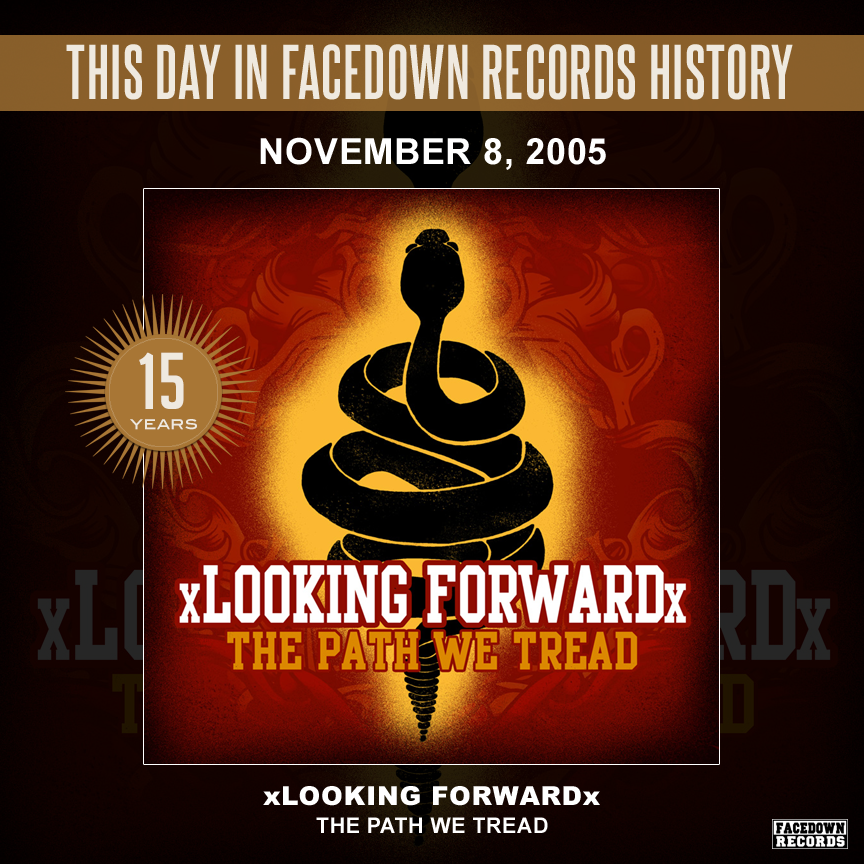 Fifteen years ago, Maryland straight edge hardcore band xLooking Forwardx totally killed it with their Facedown debut album “The Path We Tread.” The angry old-school hardcore anthems are still some of our favorite songs, and as vocalist Justin Challiou finds out, sometimes the more things change the more they stay the same.

Lyrically, this is still an album that I am proud— there isn’t anything on it that I am embarrassed about having said. However, I believe that if I were to sit down and write a record now, I would have a few more songs like “You’re Worth It” and “Each Step,” and a few less like “Waste of Time” and “Not For Sale.” Don’t read too deeply into that. I don’t disagree with the sentiment of those songs at all, it’s just that at 35 years old I don’t think I’m angry enough to write them anymore. A quick note about “Not For Sale:” for anyone keeping score we are all still straight edge (still standing here…whatever that means…give me a break, I was 19 when I wrote THAT song!); so it’s not that I wouldn’t still write a straight edge song, but boy is that song mean! “Not For Sale” was originally my idea for the title of the record. I was picturing the album cover being the Daniel Gadsden flag (yellow background with the green snake and the words “Don’t tread on me”) but instead it would just say “Not For Sale.” Simple. Thinking back on it I still like it. Jason Dunn wasn’t feeling it. So “Not For Sale” became “The Path We Tread.” Also, I seem to remember at that time being really into Matthew 10:16 where Jesus sends his disciples out into the world and he tells them to be “as wise as serpents and as gentle as doves.” That must have gotten the snake thing rolling around in my head which lead to the album cover art. When we received the first proofs for the art there were no X’s around the band name so I had to call Mr. Dunn and explain that there had been another band called ‘Looking Forward’ so we needed the X’s to differentiate us from them. He didn’t seem impressed. Maybe that was because we were already like two times over our budget.

Tracking the songs was quite a different process than we were used to with our previous recordings. Making an album at Trax East was kind of a dream of ours since that studio has put out some of our favorite records, but it was clear from day one that we had entered a different caliber of studio. The producers pushed us hard and required a level of perfection that we had never experienced before and it just about broke us and bankrupted the label. At heart, we were a punk rock band and we were used to playing fast and raw. That being the case we never felt like every note had to be perfect. We were tight and we felt like we were well rehearsed, but we had stepped up to another level and we weren’t ready for it. The end result is a record that is technically perfect. It’s heavy, fast, on-tempo, in tune and everything else that would define a record from a performance perspective. My personal opinion is that maybe it’s too clean, and that the flawlessness of it robs it of some feeling. Don’t get me wrong, I’m very proud of it and I’m proud of the way the guys performed, but I would have loved to hear those songs just a little bit more raw.