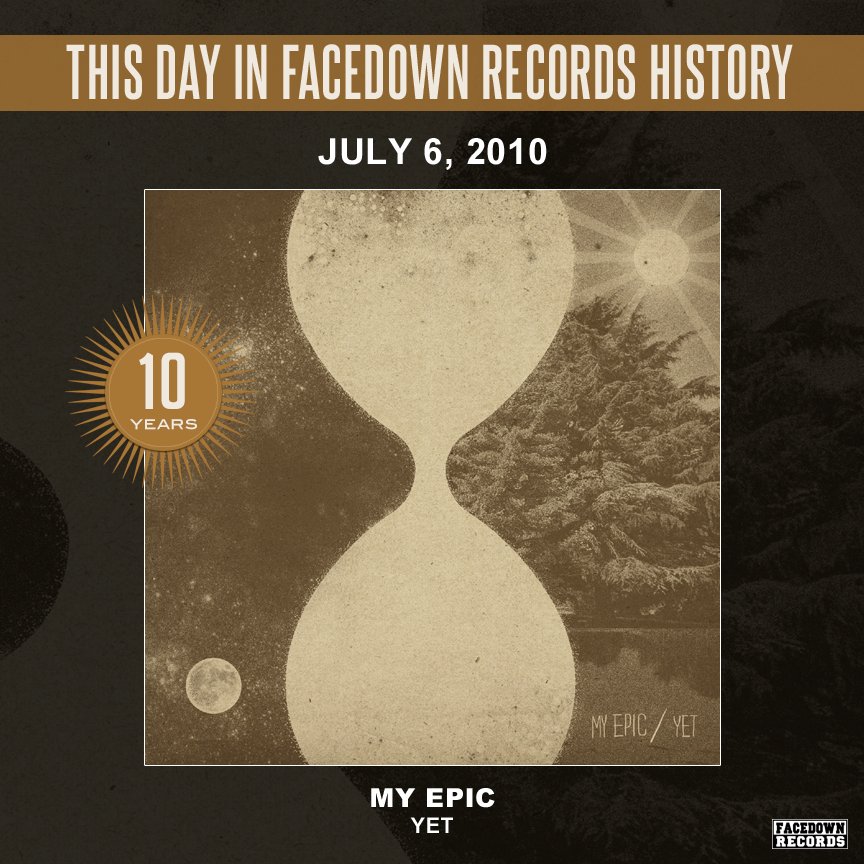 Ten years ago today My Epic released their touchstone Facedown Records album “Yet.” Now the brothers Stone reminisce about the difficult circumstances surrounding their most satisfying release.

Aaron Stone: When I think back on “Yet” all I can think of is the faithfulness and power of G-d. We had been a full time band at that point for almost three years. We were proud of our first record but knew we could do better and had no clue how to make that happen. Jesse was stepping out of the band, things were tight financially, and Jeremiah and Jesse were newly married.

Jeremiah Austin: One of my favorite aspects of writing records is how they act as milestones in my life. The writing and recording of this record lined up pretty well with my first year of marriage. It brought new insights into the writing process, as it did Jesse as well, and Mark Nicks who had beat us both to the altar by only a few months. I have to brag on my wife, and, frankly, all of our wives, for being so supportive and helpful. It wasn’t easy for anyone involved, especially the wives. At least we get to reap the benefits of the hard work in a more direct way, they simply get the gratification of their husbands, hopefully… It’s a thankless job, really. They sacrifice their time and money just as much as we do, but only really get to enjoy the sidelines. I learned this more from Yet than any other time in the band’s existence. I now look at every band and every record and realize that it’s more than just four or five guys who made it happen.

Jesse Stone: In the middle of writing this record I had to inform two of my best friends that my wife and I would be moving from Charlotte NC (our home base at the time) to Michigan in February. It was October then and we were heading into studio in March. I guess when you know the end is coming it allows you to savor each moment more than you would have otherwise. Not that it suddenly became easier to write – it definitely didn’t – it was just as grueling a struggle as ever, however the process took on a new sweetness as I thought it would be my last.

AS: The writing was a mad dash with most of the lyrics not completed til studio despite constant hours of working at it. It was a hard time.

JS: Regardless of our most intentional efforts we only had 7 of 10 songs finalized when I moved to Michigan. Which led to Mark Nicks of Cool Hand Luke stepping in to help Aaron and Jeremiah finish the three remaining songs.

AS: Mark had actually introduced us to Matt Goldman and somehow Jason Dunn and our family at Facedown Records had worked it out for us to record with him at Glow in The Dark Studios for 2 weeks. Matt Goldman is such an awesome and gracious guy and was an amazing encourager. But still – as always – we went down to the wire. We would record all day and write lyrics all night and try to squeeze enough sleep in to keep our sanity. It never got easy but bit by bit we chipped away at it.

JS: It was a milestone for us — tracking our record in the same studio that had been the birth place for the vast majority of the records I loved.  Copeland, Underoath, As Cities Burn, Cool Hand Luke…all these bands had called this space home. “Yet” began our relationship with Matt, who aside from being one of the most rad guys ever, also happened to be the producer who had captured all those brilliant records…allowing passion and nuance to show through in a way few others have ever been able to accomplish. He’s someone who understands drumming in a more complex manor than I could ever hope to comprehend.

So I flew down from Michigan to spend the first weekend of our studio time tracking my drums and Mark drove up to meet us and track the additional songs. We were able to do a quick run through of the songs Friday night when I landed, which was great considering I hadn’t touched a drum set in over a month and a half. It was already cool enough that Mark, one of our musical heroes, had become a friend and contemporary through our shared experiences in touring with Cool Hand Luke,  but to then collaborate with someone who had such a profound effect on my formation as a drummer was truly special. To be in studio tracking drums together will always be one of the highlights of the things I have experienced as a musician. Time-wise everything had to come together perfectly and praise God it did.

AS: We almost always finished lyrics minutes before we needed them. I can so clearly remember sitting at the kitchen table in the studio all hours of the night in desperation begging G-d to give us something that would bless Him and encourage others to draw nearer to Him. It was one of the most exasperating and humbling times of my life but when we reached the end of ourselves the we found the edges of the greatness of G-d.

JA: I often see it as the record where we became men. It wasn’t ground-breaking or mind-blowing, we know that, but it was huge for us, and it seems to have been huge for a lot of other people. I’m just constantly and consistently humbled and grateful to get to be involved in what G-d is doing through My Epic, because it doesn’t make a lot of sense from a strictly temporal perspective. Yet marks the biggest step in my maturity, spirituality and responsibility.

AS: When I listen to a lot of that record I am still surprised and humbled by it. There are many moments of it that I know are better than anything we could come up with by ourselves. ‘Lashes’ had been the first song we had written for the record and I had known for almost a year what it was about but had found it almost impossible to be honest without seeming like I was trying to be scandalous. ‘Lower Still’ was written latter in the process and caught us off guard. Our friend Micah from So Long Forgotten happened to be driving through on vacation and at the last moment we decided to throw him on the song.

Near the homestretch of the recording most of the guys from our community back in Charlotte came down to do all the gang vocals. It really encouraged us and helped us finish strong. By the end we were exhausted and I even ended up getting shingles but it was all well worth it. “Yet” opened the doorway for us to everything else that has happened as a band. I will always think that our most current record is our best work but “Yet” is the first record I look back on without regret. It may not have redefined music but it was the absolute best record we could make at that point. It was honest and raw and we are so humbled that the Lord has used it at all.