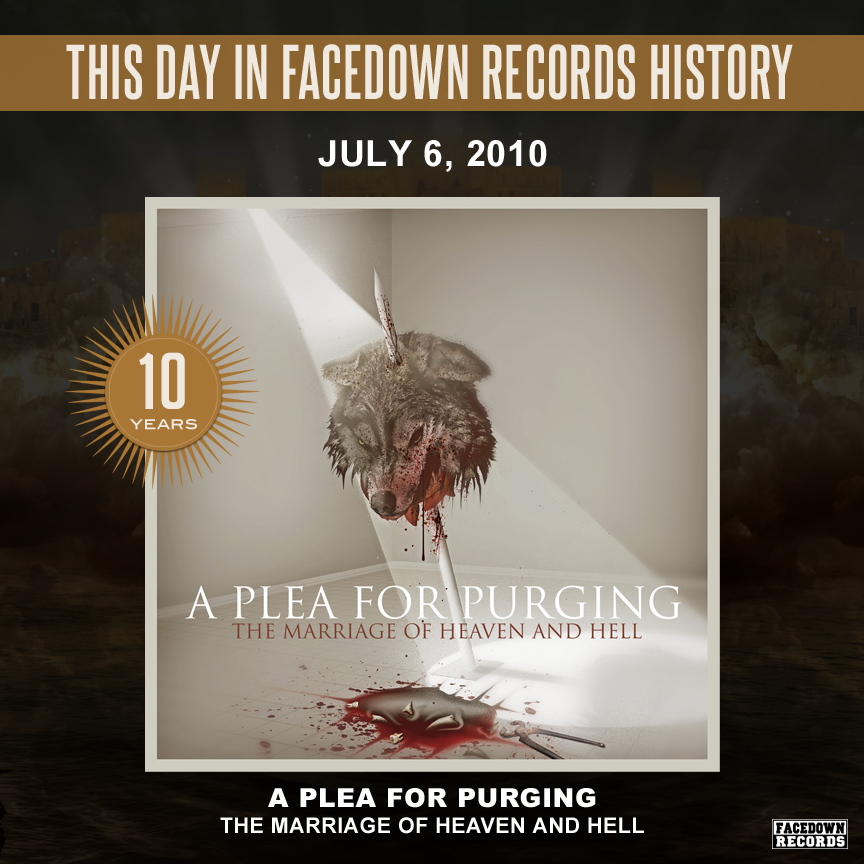 Vocalist Andy Atkins and guitarist Blake Martin look back on the controversial A Plea For Purging album “The Marriage of Heaven and Hell.”

Andy: The Marriage of Heaven and Hell was one crazy ride, man. It’s pretty trippy to look back in retrospect at these songs and their lyrics. I’ve always tried to be an honest guy and I feel that shows in Plea’s records. Sometimes transparency in art can taste like a big dirty shoe, though.

Blake: TMOHAH was a game changer and turning point for Plea. I remember spending my days at John’s parents’ lake house drinking coffee and riffing with the other guys while attempting to write the most pissed-off sounding record we could possibly put out. Because that’s what we were – pissed off. I drank LOTS of coffee.

A: Even though the record is very dark, the writing process for the record couldn’t have been better. We all got to stay at the lake house out in the middle of nowhere. We ate junk food, talked about getting “in shape,” watched a lot of TVU music videos, and slept till 1pm everyday. I miss life on the rock clock.

We had a lot to say on this record that some people really connected with. We also had a lot to say on this record that drove others away. It was a real test in friendship to put this album out. Not only were we putting our innermost thoughts and insecurities on the table for the world to see, we were also questioning the motives of everyone around us, many of those people being our close friends. It is a true testament of loyalty to those that allowed us to speak our mind and then continue on the journey with us. Some people didn’t get it and that’s okay.

B: It had been a long road that brought us to that point, too. So many things back then that felt so meaningful and important feel so trivial and meaningless now. Nevertheless, we put it all on the table. How we felt about everything in our lives. Right or wrong. And to have Jason and the rest of the Facedown crew support that outlet meant so much to us. I remember feeling grateful for that.

I remember touring Europe just before recording and listening to pre-production demos over and over with Aaron. I remember getting really pumped on Andy’s lyrics too. I also remember the roller coaster ride that was the production of that record. The loss of old friends and fans, and the gaining of new ones. The actual release of that record was intensely cathartic for us as well. We said what we needed to say. Got it off our chests.

A: Recording was a whole other monster. After some scheduling issues we had to make last minute changes as to who would mix the record for us. I remember returning home from a tour the same day as the now infamous Nashville flood, dropping all the boys off at home and driving through the storm with Aaron to Brian Hood’s old studio in Alabama to mix the record with him in just a few days. It’s wild to think about how huge that storm was and how much destruction it caused, but Aaron and I just drove right through it. That release date must’ve been really important for some tour, haha. Who knows?!

B: We lost a guitarist soon after the record release. I think that, combined with the release, started a return to the basics and fundamentals of our approach to what we were doing as friends in this band. We started enjoying ourselves and enjoying each other more. We started to put it all in perspective – the ups and downs – and started to realize what was important. We mutually ended Plea a few years later as best friends and brothers. No big drama-filled meltdown, no dropping off a tour halfway through, no fallout with our label. We even got to have a killer sendoff in our hometown with all our buddies…so cool.

TMOHAH was the start of that slow exit. It was a sort of pinnacle for us in many ways. And I’m grateful it saw the light of day.

A: I can’t forget to touch on the most important piece of the puzzle – the shows! This record really brought on a new fan base for PLEA. I believe if you took a poll with fans, it’d be our “Mona Lisa.” The shows got really intense on this record cycle. I saw more stage dives on those tours than any before. It was a really fun time to be in the band. I think we all knew things were coming to a close soon so we were really living it up. I’ll never forget those times.

The Marriage of Heaven and Hell is the best heavy record of all time and Facedown Records is King of all labels…..yesterday, today, and forever.

Listen to The Marriage of Heaven and Hell on Spotify.