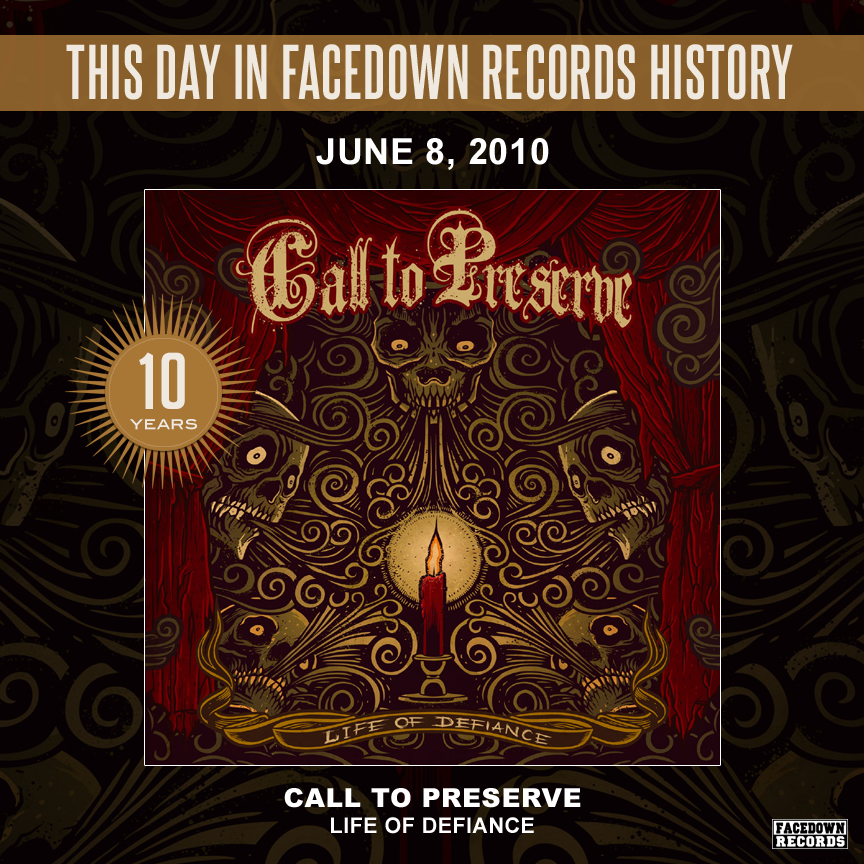 Harbor Partin recalls what it was like following counter-intuitive inspiration, tracking 10 hours a day, and taking advice from Fred Armisen in this installment of the Facedown Legacy series.

Most of the album was written in late 2009/ early 2010. Up to that point we had been touring nonstop since “From Isolation” came out in fall 2008. I moved back to Destin for the rest of the year and would record song ideas on my computer and send it the guys. They would have goofy titles like “Mock Trial With J. Reinholt” “Saint Morrisey” and “Seinfeld Reunion.” Then I drove down a couple times and we jammed out on the new stuff and fine tuned them.

By January I moved back down to Rockledge and the album started taking shape. By then it was clear this was going to be a grittier, more complex record than From Isolation. We had originally wanted to go back to The Outpost in Boston to record the album, but it wasn’t feasible with time and money. Advent had just released “Naked and Cold” a few months before while we were on tour with them and it had a killer sound, so we decided to record at the same place, Warrior Sound in North Carolina.

We had about a 6 day window to get the record done before we had to go home and get ready to go to Europe with Agnostic Front for a month. We did something like six 10 hour days grinding the record out with no breaks or anything. The engineers Mitch and Alan worked around the clock, mixing during the night and tracking during the day. The guys from Advent showed up a couple times and helped us with gang vocals. Joe did guest vocals on “Across the Aisle” and did his part way better than we had originally envisioned it. Even though we had such a short time we took a lot longer to work things out, get the right sounds, switch out equipment and try different things.

The word that always comes to my mind when I think of “Life of Defiance” is dense. I always feel like musically, lyrically, even the way it was recorded, it’s just a denser record than anything else we put out. We also kind of stopped being afraid of trying new things. A slow song with clean guitars? Why not? A drum build up that leads to no where? Go for it. Everyone else is playing in crazy low drop tunings and putting out super produced records with quantized and triggered drums, so let’s tune back up to standard and make everything sound really dirty.

By no means were we breaking any new ground in the genre, and it wasn’t like we completely changed our sound, but there was still growth. This was all for better or worse. I think it’s possible that people had a harder time getting into this record. There were less memorable sing alongs or obvious mosh parts, but some of the most personal songs I’ve ever written are on that record. “Functionary” is still one of my favorite songs that we ever put out and I still remember John laying down the vocals for “Holding Embers” and being taken aback by the raw emotion that was being translated through the song. Listening back 5 years later, away from the pressures the band felt in that moment and the high expectations you tend to put on yourself, it’s a record I’m proud of and I’m glad we made it the way we did.

Side story: Mike might be able to tell this story better, but here it goes. We thanked Fred Armisen in the liner notes of “Life of Defiance.” It was kind of a joke, but here’s why we did.
After Mike had finished all the drum tracks, he had to fly back home to take a test for school. He had a layover at JFK and while he was waiting for his flight he ran into Fred Armisen from SNL. They ended up talking for a while about music and comedy. Mike told him how we were about to go out with Agnostic Front and how he had started doing improv and was getting into acting. Fred said he loved Agnostic Front and wanted to go see them recently but he had to work that night (aka, he was on SNL that night). A couple weeks before that, Fred was in a sketch with Dave Grohl where Fred was the father of the bride who gets his old band back together to play his daughter’s wedding. It turns out they’re a hardcore punk band and Fred is flipping over tables, breaking dishes, basically destroying the place.
Fred had been in the scene when he was younger and played drums in Fugazi-esque band called Trenchmouth in the early 90’s. Fred’s advice was to not feel like you had to choose music or comedy and that there’s room for both. It was funny to have a meeting of these guys who were both drummers in hardcore punk bands and got into doing comedy later on.