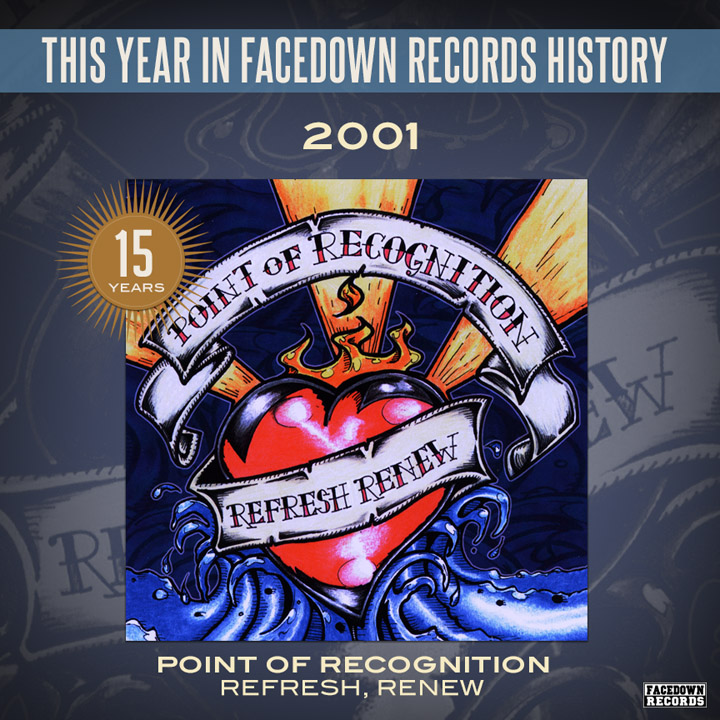 Aaron Irizarry remembers all the way back to the 2001 release of Point of Recognition’s “Refresh, Renew.”
Listen now on Spotify.

15 years? I am pretty sure that “Refresh Renew” has aged much better than I have. I remember being so excited for this release, it was to be our first release as an official Facedown band, we had recently recorded the three way split EP with Cast in Stone and Torn in Two

“Now the Tables Have Turned”, but were still on Rescue Records at the time. We had (and still have) a ton of respect for Facedown Records their mission, and how they carried themselves as a label so to join the family a release a new record was really exciting.

Before recording Refresh, Renew we went through some line up changes that would impact the writing and recording process. We now had two guitar players and had gone down to one singer. Our sound was changing as a result, we were balancing out a more metal sound with faster and heavier riffs. Some of the songs we wrote on that record are my favorite POR songs.

The theme of the album was a balance of encouragement and challenges for the listener. For me it was the best POR album lyrically end to end. Many of the songs were inspired by personal struggles, the struggles of those close to us, and things we were learning. The title track Refresh, Renew came from a line in an old hymn that I can’t remember the name of (that whole getting old thing) and has stuck with me all this time. Whether I am worn out and frazzled, or find myself in place of complacency, being refreshed spiritually and having a renewed vision and focus will always be a need throughout life and to know that God is there to meet that need is a great comfort.

Another fun part of “Refresh, Renew” was working with out guitar player Tim Cordova on the album art. Tim has a cool drawing/sketching style and I think it made for a really cool layout. Let’s not sleep on the secret track either! We re-recorded ‘Closer Than a Brother,’ added a little 80’s metal flair, and some killer digital cowbell courtesy of Mike Kelly—all the result of late nights in the studio.