FACEDOWN RECORDS
FACEDOWN LEGACY – IN THE MIDST OF LIONS “THE HEART OF MAN”
August 3, 2015 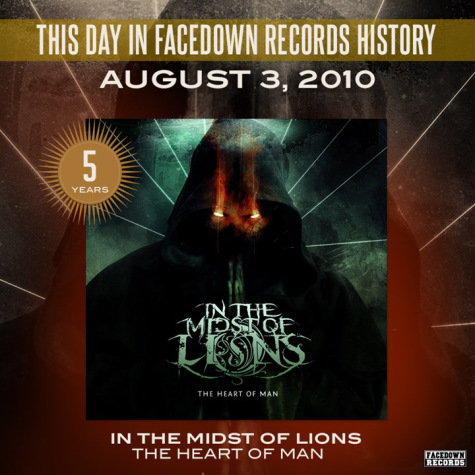 Ryan McAllister, guitarist for tech metal band In the Midst of Lions, remembers writing and recording their debut Facedown album The Heart of Man.

I have a hard time believing we released this album 5 years ago, time really flew by. The Heart of Man was my favorite record we released; I had the most fun

writing it with Sam [Penner] and Alex [Livingston], and I had the most fun recording it with Jamie King. This was the first album we recorded with Sam and Jake, though they had toured with us since the release of the previous album. I feel like the message of this album was much bolder than our previous and latter albums. Sam and I spent months piecing together each song, writing and rewriting every part. I am the most proud of being able to work with Levi the Poet in the studio and seeing his creative process and how that transfers to his inspiring live performance. We are all proud of that album and are so blessed to have had the opportunity to record and release it on such a great label. I speak for the whole band when I say we are so thankful for everyone who gave this album a listen and for Jason [Dunn] for giving us a chance.