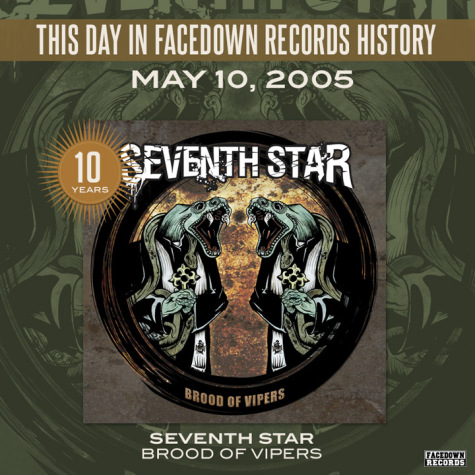 This was really the record that brought our band back from the dead and cemented our sound and “legacy,” so to speak. We always tried to stay humble and gracious, but in retrospect, I have learned we were quite a bit more influential than we realized at the time. Which is kind of weird to say.

Wow…ten years already. It is just wild to think about our baby “Brood of Vipers”—our career-defining, objectionably best, and overall gnarliest record—now being a 5th grader! (I’m picturing a ‘roided-out kid wearing a basketball jersey

bench-pressing cinder blocks on the playground, silently making fun of the kids wearing light up sneakers.) Ten years ago we had so much excitement going into the writing and recording process. After releasing “Dead End” in 2003 we totaled our van, kicked out our singer, had guitarists that couldn’t tour anymore, and we really contemplated just hanging it up for good. We decided to forge ahead. We recruited my childhood friend Johnny on vocals and our one time fill-in guitarist Chase to become a permanent member. It was a completely different dynamic. It’s like if “Dead End” was a bulldog,  “Brood” was a pitbull from the DMX “Ruff Ryder’s Anthem” music video. (“The Undisputed Truth” would be one of those pit bulls if he was left by himself at the junkyard and had a tendency to drink the leaking antifreeze. But that’s another story.)

The writing process on “Brood” compared to “Dead End” incorporated way more influences on our sound. I think on “Dead End” we were really worried about making sure we were being super-hardcore in the sea of faux hawks and fashioncore of the time. For “Brood of Vipers” we were really focused on being as brutal and intense as possible without being just a never ending stream of breakdowns. On this record we were heavily influenced by Merauder, All Out War, & xDisciplex (I know, extremely surprising) and how they would incorporate different elements of metal into hardcore without sounding “metalcore.” This approach combined with Johnny’s more intense vocal style—we were a different animal altogether.

We recorded at Godcity studio with Kurt Ballou from Converge who is a musical genius and made some straight up nasty guitar tones. We were so stoked when we turned in the record to Facedown. I remember Jason Dunn calling me and saying, “Wow you guys did it!” and later referring to it as “The ultimate work out record” which was some high praise!

Since the band has broken up I’ve gone on to direct music videos, and I’m constantly surprised by the people I work with who consider Seventh Star to be influential on their band.  A Day to Remember came from the same town of Ocala and really counts us as one of the reasons they started playing, which isn’t surprising, but still cool to see that somehow our music had an influence on one of the biggest bands out right now.

Members of bands like The Devil Wears Prada, The Ghost Inside, As I Lay Dying, August Burns Red, and even The Wonder Years have all commented about how they were fans and sometimes guys would start playing our riffs on set (not like they were rocket science) which is always mind boggling. Despite the fact that we would only headline to a couple hundred kids here and there, it’s quite rewarding to hear those things so long after the band’s been done.  (Insert #sweetbrag.)

Without “Brood” none of that would’ve happened. If we would have broken up after “Dead End,” we would’ve been just a blip on the radar of mosh. I feel like I could write endless stories about the time we spent writing, recording, and touring on this record, but I’ll save the rambling and just say this is our best record and certainly one of the best times of my life.

Thanks to Jason & everyone at Facedown who believed in a hardcore band from Ocala, FL and giving us so many opportunities.

Listen to “Brood of Vipers” on Spotify.