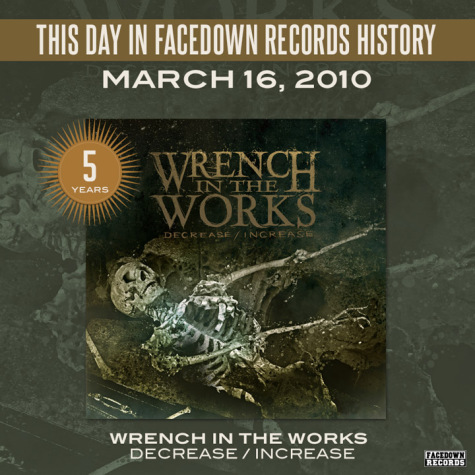 Five years ago today Facedown released the sophomore album from Wrench in the Works and Decrease/Increase was born. During the writing and recording of the album, Wrench went from a three piece to a five piece which, in addition to using baritone guitars on the recording, gave their sound a big nudge in intensity. Their style of progressive metal-influenced-hardcore rebelled against the emerging genre’s restrictive conventions and the band’s unconventional writing shone through.

Drummer Andy Nelson recalls having to find a “work around” to get guest vocals from Tommy Green (Sleeping Giant) laid down without being able to have Tommy in the studio:

Tommy did a guest spot on a song called Death Slayer – it’s a slower and heavier song on the record and we just thought his vocals would sound awesome on it. He has a very anointed voice and his tone and placement is just great. Funny story, we actually met up with him while SG was on tour. We drove from Conneticut to New Jersey and brought a traveling studio, power converters and all, and he recorded his vocals in the back of a Jeep Forester. It was pretty freakin punk.*

Vocalist Darrell Tauro remembers that the stand-out track from Decrease/Increase for him was “Project AK-47” named after the rescue organization for child soldiers and children in armed conflict in Southeast Asia.

They’re going out there and freeing child soldiers and rescuing these kids. Some of them are 8, 9 years old, and they’re being trained and used, basically, for drug armies—even governments use them. This organization goes in and rescues these kids and houses them and educates them. They give them a chance to live their lives and not be victimized by these regimes.**

Project AK-47 raises awareness and money to help save these kids. For only $7 you can save a kid.  When you think about it, we spend more on lunch in a day then it costs to save a kid’s life, so after hearing about this we felt a Godly calling to spread awareness as a band.*

*Quote taken from this Noisecreep interview.