FACEDOWN RECORDS
FACEDOWN WELCOMES THOSE WHO FEAR TO THE FAMILY
November 15, 2012 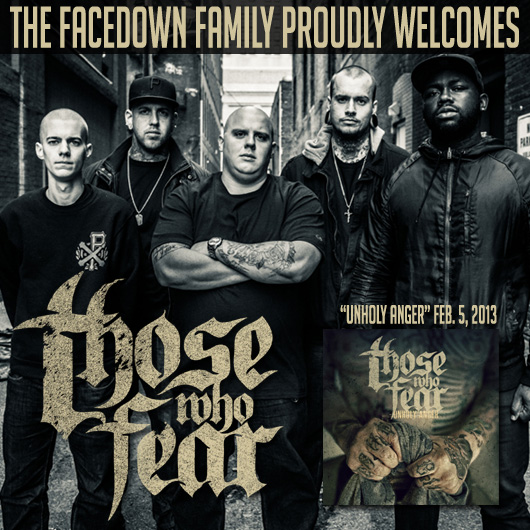 Born and raised in the Pennsylvania Rust Belt, Those Who Fear are coming out swinging with the blue collar work ethic of their hometown, Pittsburgh, PA staunchly ingrained in them. Their brand of east coast hardcore comes at you like a wall of sound, and Those Who Fear make no apologies for the message behind the music. “The power behind our message is our main drive. Without that we’d be just another band.”

Those Who Fear self-released an EP in 2011 and hit the road hard, touring all over the US. Now the band finds themselves exploring the darker side of faith and ideology, writing and recording their debut full length Unholy Anger. This newest effort was recorded with Josh Schroeder at Random Awesome Studios (A Plea For Purging, The Burial). “Having worked with Josh on the Legacy EP, he knows how we work and really pushed us to get the best record we could in the time we had. Long 10 hour days, but we all believe it was well worth it.”

Those Who Fear will release “Unholy Anger” with Facedown Records on February 5, 2013. Check out the track “Burn” on You Tube.